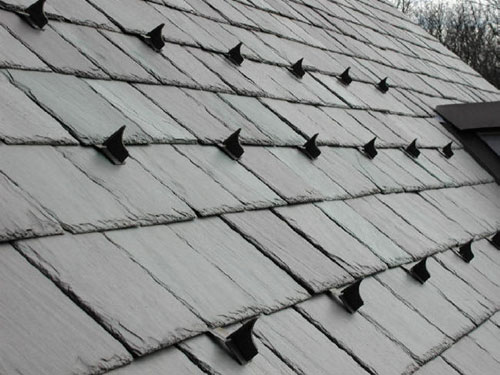 Snow guards are protruding metal or plastic devices (or lengths of bars) that are installed in intermittent locations on a roof that are intended to prevent accumulated snow and ice from sliding in great sheets off the roof. They encourage the gradual melt and breakdown of the snow mass into smaller sections. They vary in their method of attachment to the roof, as well as their color (they usually match the roof or are Snow guards prevent snow and ice slippage transparent), and their material (typically, they’re made of metal or poly-carbonate).

Snow and ice are surprisingly heavy — a single cubic foot of ice weighs more than 52 pounds — and when they avalanche from a roof, they can cause a great deal of property damage and injury. Roof avalanches can injure pedestrians and livestock, bend gutters, and damage vehicles, lower roofs, HVAC equipment, and other property below. This typically happens when warm weather follows a snowstorm, creating melt-water that lubricates the roof.

In many cases, snow guard systems are not included during initial roof installations because of the additional cost and the general lack of awareness of their need. Nevertheless, building owners can be held liable for any property damage and personal injury resulting from excessive snow if it could have been prevented with snow-retention systems. Investing in the right snow-management system may mitigate liability, prevent property damage, and reduce threats to pedestrian safety.

Snow guards are not always effective or helpful, however; in very heavy snow, they may not be tall enough to resist the snow’s downward force, and shingle roofs typically have enough resistance to hold the snow naturally. To act as effective restraints, snow guards should be installed by qualified roofers who can competently consider factors such as sheathing type and thicknesses, roof type, roof slope, and snow loads in determining proper snow guard sizing, design and placement. Homeowners and handymen who attempt snow guard installation may install them in an improper pattern, or only weakly attach them to the roof, which may actually increase the potential damage due to falling snow and ice. Also, snow guards should never be used as anchors in fall-arrest systems, as they are not strong enough to support roof workers, and the guards themselves may be damaged.

Snow guard placement should be consistent with the following safety and efficiency standards:
– Snow guards should be mounted on the lowest portion of a roofing panel where the snow and ice actually move. Snow guards mounted on a high seam will be ineffective when the snow and ice compact beneath them.
– Snow guards should not be mounted beyond the bearing wall on an extended roof section, as this placement can result in ice damming and roof damage.
– Snow guards should be installed over sidewalks, doorways, driveways, and anywhere else that people are likely to walk or gather, or where property is stored.
– Check the mounting tape, if it is present. Tape has very little or no resistance to ultraviolet light and tends to roll up underneath the snow guard when exposed to shear loads.

There should not be more snow guards installed than are necessary, as they might allow too much snow to accumulate and damage the roof. Snow guards should be installed in the critical areas listed, but not necessarily in areas where snow and ice can be released safely onto the ground by gravity and natural warming.

Only adhesive should be used to mount snow guards to standing-seam, floating-type roofs, as this technique allows for thermal expansion and contraction of the panels. It also allows for quick release during extreme snow accumulation that might otherwise damage the panels.

In summary, snow guards are devices that attach to the roof in order to hold snow and ice in place so they can melt slowly and safely.