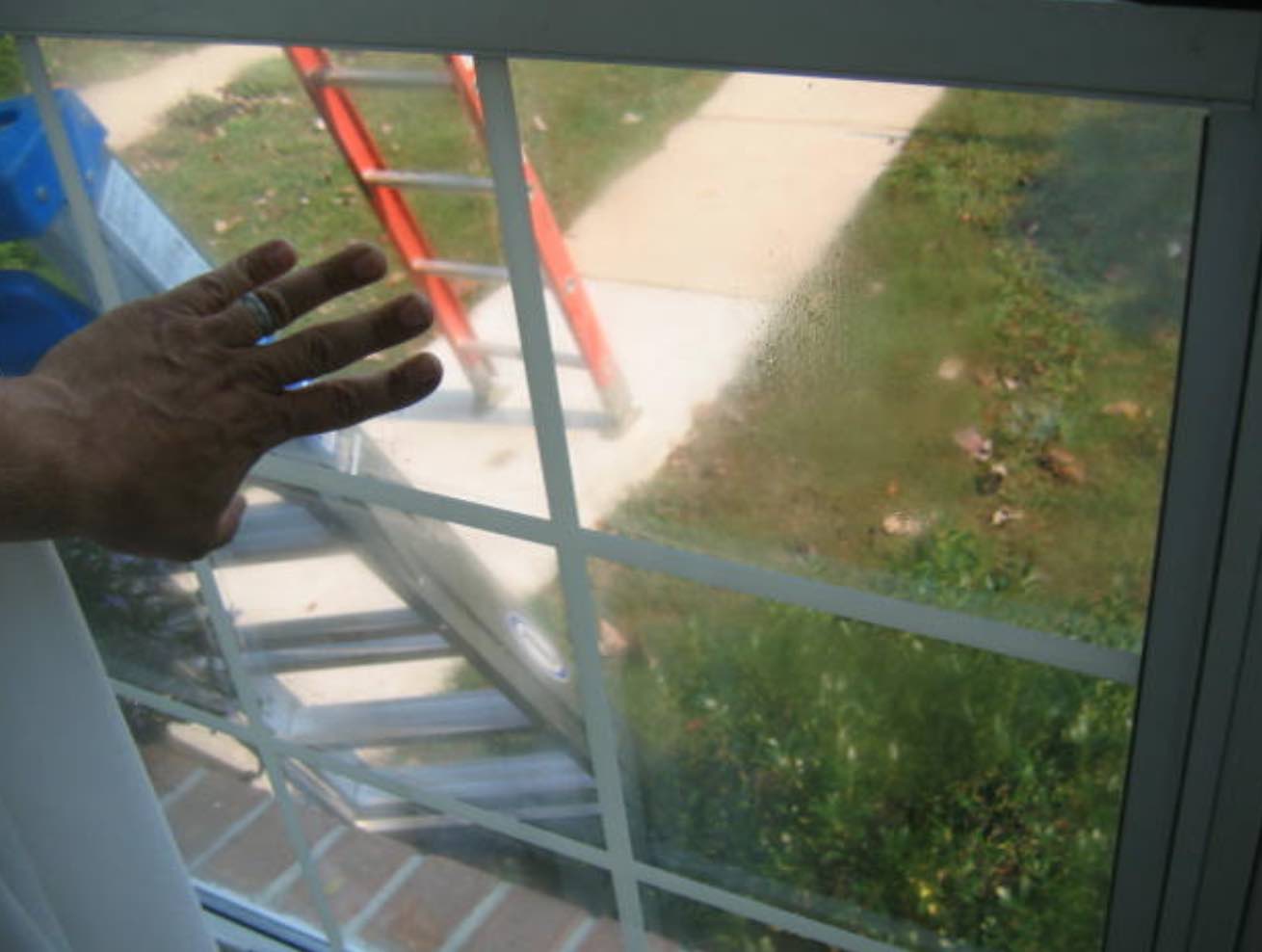 Condensation is the accumulation of liquid water on relatively cold surfaces.

Almost all air contains water vapor, the gas phase of water composed of tiny water droplets. The molecules in warm air are far apart from one another and allow the containment of a relatively large quantity of water vapor. As air cools, its molecules get closer together and squeeze the tiny vapor droplets closer together, as well. A critical temperature, known as the dew point, exists where these water droplets will be forced so close together that they merge into visible liquid in a process called condensation.

Silica gel has an immense surface area, approximately 7,200 square feet per gram, which allows it to absorb large amounts of water vapor. As the sealant protecting this space fails over time, increasing amounts of moisture-containing air will enter the space between the panes, and the silica pellets will eventually become saturated and will no longer be able to prevent condensation from forming. A double-paned window that appears foggy or that has visible condensation has failed and needs to be repaired or replaced.

Over time, the constant pressure fluctuations caused by thermal pumping will stress the seal. Eventually, the seal will develop small fractures that will slowly grow in size, allowing increasing amounts of infiltration and exfiltration of air from the space between the panes.

Windows on the sunny side of a home will experience larger temperature swings, resulting in greater amounts of thermal pumping, seal stress and failure rates.

Vinyl window frames have a higher coefficient of expansion resulting in greater long-term stress on the double-pane assembly, and a higher failure rate. Windows also experience batch failure, which describes production runs of windows, especially vinyl windows, that are defective, meaning that the pane assemblies have been manufactured with seals that have small defects that will cause the window to fail prematurely.

The Nature of Damage

If it’s allowed to continue, window condensation will inevitably lead to irreversible physical window damage. This damage can appear in the following two ways:

Condensation is not always visible. If the failure is recent, a failed window may not be obvious, since condensation doesn’t usually form until the window is heated by direct sunlight. Windows in the shade may show no evidence of failure, so inspectors should disclaim responsibility for discovering failed double-paned windows.

Thermal Imaging as a Detection Tool

Under the right conditions, it’s possible to use an infrared (IR) camera to detect failed windows. IR cameras are designed to record differences in temperature.

According to industry experts, the glazing assembly can be replaced  approximately 75% of the time.  Occasionally, the sashes must be replaced, and only about 5% of those cases require that the entire window be replaced.

Inspectors should be aware that there are companies that claim to be able to repair misty windows through a process known as “defogging.”

This repair method proceeds in the following order:

There is currently a debate as to whether this process is a suitable repair for windows that have failed, or if it merely removes the symptom of this failure. Condensation appears between double-paned windows when the window is compromised, and removal of this water will not fix the seal itself. A window “repaired” in this manner, although absent of condensation, might not provide any additional insulation. This method is still fairly new and opinions about its effectiveness range widely. Regardless, “defogging” certainly allows for cosmetic improvement, which is of some value to homeowners. It may also reduce the potential for damage caused by condensation in the form of mold or rot.  Some skepticism exists about the effectiveness and cost effectiveness of this method of repair.

In summary, condensation in double-paned windows indicates that the glazing assembly has failed and needs repair or replacement. Visible condensation can damage glazing and is the main indication of sealant failure.